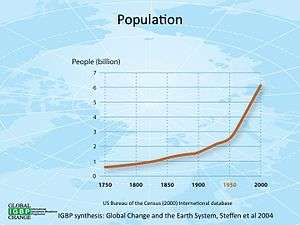 In 1980, a group of scientists led by Swedish meteorologist Bert Bolin set up an international programme, the World Climate Research Programme (WCRP), to determine whether the climate was changing, whether climate could be predicted and whether humans were in some way responsible for the change. The programme was sponsored by the World Meteorological Organization and the International Council for Science (ICSU). As time went on, there was a growing realisation that climate change was one part of a larger phenomenon, global change. In 1987, a team of researchers, led again by Bert Bolin, James McCarthy, Paul Crutzen, H. Oeschger and others, successfully argued for an international research programme to investigate global change. This programme, sponsored by ICSU, is the International Geosphere-Biosphere Programme (IGBP). The programme has eight projects investigating different parts of the Earth system and links between them.